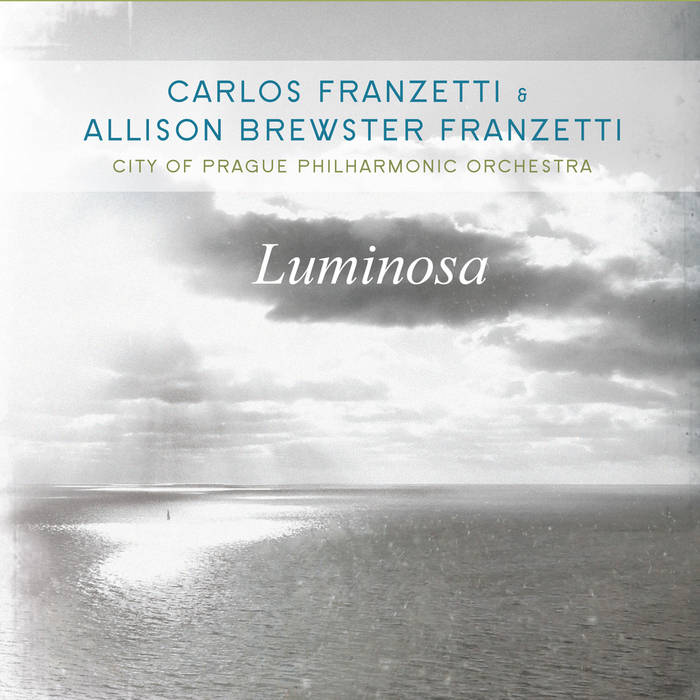 Argentinean composer/arranger Carlos Franzetti is well known for his devotion in bridging the gaps between jazz, classical and Argentinean folkloric music, especially tango. His efforts have led to fruitful collaborations with many important musicians and ensembles. None has been more important than the work he has done with his wife, the concert pianist Allison Brewster Franzetti, and his regular orchestra, The City of Prague Philharmonic Orchestra.

For their new recording, Luminosa, Franzetti and Brewster Franzetti join the City of Prague Philharmonic Orchestra once again to record a collection of pieces by Franzetti and a handful of celebrated Argentinean composers. Franzetti conducts the pianist and the orchestra through pieces that blend the rhythms of Argentina, jazz harmonies and popular classical sensibilities into attractive and highly listenable pieces that hark back to popular instrumental music of the 1950s and 1960s.

The Franzetti connection to the City of Prague Philharmonic Orchestra dates back fifteen years, when Franzetti arranged pieces for David Sanchez’s Coral. The composer hailed the Orchestra’s fantastic musicians and organization, including their friend and Luminosa producer James Fitzpatrick, and going back regularly to utilize their skills for projects ranging from his own Film Noir to Rubén Blades’s Tangos.

For Luminosa, Franzetti and Brewster Franzetti wanted to record pieces that covered their esthetic range and kept the listeners’ attention. They did this by adapting pieces from Franzetti, including his Concierto Del Plata and some interludes from a ballet he has been working on. The recording also includes two interpretations of tangos by two beloved Argentinean composers and a commission from contemporary Argentinean composer and Latin Grammy winner, Claudia Montero.

The title track was a spur of the moment composition that came to Franzetti suddenly before the couple’s departure to record the album and, with some extra time, Franzetti was able to flesh out a liltingly beautiful arrangement. A spirited take of Horacio Salgan’s “Tango Del Eco” follows, the jazz inflected piece worked perfectly by Brewster Franzetti and the orchestra. Originally written as a guitar concerto, Franzetti’s Concierto Del Plata was transcribed by the couple for piano. The three movements of the Concierto are “Porteña” (a tango representing Buenos Aires), “Milonga” (a waltz-like habanera in 4/4 time that originated in Rio de la Plata) and “Criolla” (a folkloric rural style for guitar in 6/8).

The program continues with a touching take on José Dames “Nada,” a popular tango piece with the cinematic flavor of Morricone. Franzetti commissioned composer Claudia Montero, who won Latin Grammys for composition in 2014 and 2016 (between Franzetti wins), to write Concierto En Blanco y Negro for Brewster Franzetti. The first and third movements, “Decidido” and “Enérgicio,” are tango based while the second, “Quasi Pasacaglia – Grave – Solemne,” is based on a passacaglia but written in 4/4 time. The recording concludes with three interludes written for Franzetti’s upcoming ballet inspired by Dante’s Inferno entitled Dante Porteño. “Dante Noir” reflects Franzetti’s love of noir film scores, while “Vals De Beatriz” is a galloping waltz full of gusto. “The Ninth Circle” closes the disc in dramatic style with swirling strings and piano.

Together, Carlos Franzetti and Allison Brewster Franzetti have created a wonderful partnership. The duo have generated a moving collection of pieces that echo their collective influences in classical, jazz and Argentinean music on their new recording, Luminosa.