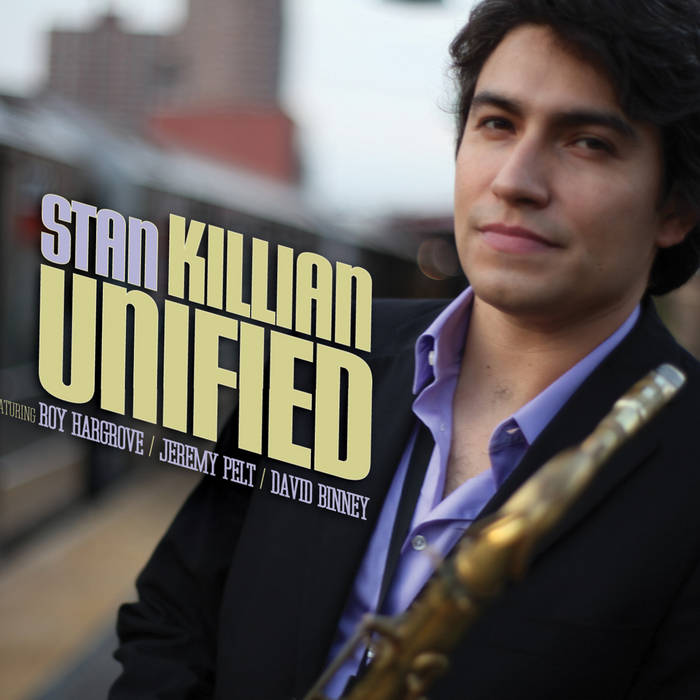 The Texas-born, New York-based tenor saxophonist Stan Killian is the latest in a long line of saxophonists blessed with the legendary “Texas Tenor” sound – from Arnett Cobb and James Clay to Wilton Felder and Illinois Jacquet; all master hornsmen who played with a big-toned, bravura sound of wide open spaces that covers the blues, the bayou, bop, the past, and the present.

A seasoned professional, Killian has gigged with many of today’s brightest stars including Luis Perdomo, Antonio Sanchez, Gene Jackson, Eric Revis, Mike Moreno, Ben Monder, and Scott Colley. Killian steps into the spotlight as a leader on this aurally auspicious Sunnyside debut, Unified.

“While writing the music for this album, I focused on two ideas,” Killian says. “First, instead of being concerned with composing intellectually difficult music for my band for the sake of being hip, I sought simply to write the most beautiful melodies I could imagine. Secondly, I wanted to unite my seemingly disparate influences into a program of what my idea of modern jazz is: the feel of deep swing with combined melodic voices, informed by the various jazz languages.”

Killian’s fluid yet muscular tenor tone is supported by two impressive combos consisting of bassists Bryan Copeland and Corcoran Holt, pianist Benito Gonzalez, drummers Darrell Green and McClenty Hunter. Also making appearances on the disc are some special guests: trumpeters Roy Hargrove and Jeremy Pelt and alto saxophonist David Binney. “I chose these particular guest artists … not simply because they are three of the most famous modern jazz players/composers on the scene today, but because they personally represent an individual vibe which, regardless of where critics put them on the proverbial jazz spectrum, is at once modern and traditional,” Killian says. “From this idea, comes the title track, ‘Unified.’”

The six other tracks – all composed by the leader, except for the spirited, Latin-tinged number “Elvin’s Sight,” written by the Venezuelan pianist Gonzalez in honor of the great drummer Elvin Jones – bop and weave with a modern, neo-classic vibe. “Twin Dark Mirrors” is Killian’s 4/4, dark and princely shout out to Miles Davis and his collaborations with Charlie Parker, John Coltrane, and Wayne Shorter. “Center” is an upbeat, unconventionally structured number in a 5/4 time signature, contrasted by the swing-at-the-speed-of-sound, angular modal track “Isosceles” and the waltzy “Window of Time.” The driving, Blue Note era-like closing tune, “Eternal Return,” remarkably, is Killian’s first composition.

It’s been said that they do everything big in Texas and the evolution of Stan Killian’s career confirms that old saying. Born in 1978, Killian’s professional career started when he was sixteen, gigging with his father Joe Killian in the San Antonio area. His father worked in the bands of Texas tenor greats Don Wilkerson, Clifford Scott and Jimmy Ford. Stan Killian, inspired by the tenor sounds of Coleman Hawkins, Ben Webster, Dexter Gordon, Sonny Stitt, and Johnny Griffin, graduated from high school in 1997 and then attended Texas State University in San Marcos, where he studied saxophone and improvisation with teachers John Mills and James Polk (former arranger and composer for the Ray Charles Orchestra).

Killian later free-lanced in the Austin music scene, performed as a side-musician with various local bands, and after his twenty first birthday, Killian recorded his first CD, Straight Ahead which featured Austin trumpet legend Martin Banks. Killian then moved to Houston to lead his own group and work with guitarist Clayton Dyess, who had performed with Nat Adderley, Dizzy Gillespie, Arnett Cobb, and Joe Pass. In 2002, Killian recorded his sophomore CD, Deep Down, which featured Dyess, Joe Killian, and Houston drum legend G.T Hogan. Stan’s playing during this period, especially his consistent emphasis on tone, reflects his early influences, the full-bodied tenor sounds of Coleman Hawkins and Ben Webster. It was also in Houston where he became a founding member of the jazz-Brazilian group, Com Voce.